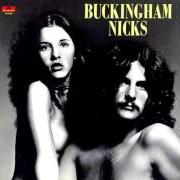 Buckingham Nicks is a 10-track LP by Stevie Nicks and Lindsey Buckingham. The album, produced and engineered by Keith Olsen, was recorded in 1973 for Polydor Records, right after Buckingham and Nicks disbanded their long-time band, Fritz. It was released that September and proved to be a commercial failure. Since the album was reissued in 1976 shortly after Nicks (whose name is misspelled as "Stevi" on the record.) and Buckingham joined Fleetwood Mac, the album has since gained cult status.