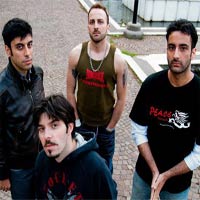 Allison flower born in May 2001 from the minds of two former school mates, Joss and Luis. They shared a huge love for music and for bands like Sound garden, Doors, Led Zeppelin, Pearl Jam, Nirvana, Beatles. The original band's name was Spleen, due to Joss passion for Charles Baudelaire's poetry. Results of their ideas were songs full of anger and melody caracterized by a simple and direct structure and a rude music style. They played live for the very first time togheter at I-Tim tour 2001, June, in Reggio Calabria, performing their song "Song of swan" in front of thousands of people. Since then Pier joined the band. In 2002 Spleen participated many contests, Arezzo Wave, Pistoia Blues, Tim Tour 2002, Adrenalive then they recorded a demo in a professional recording studio in Cosenza. Music style evolved year after year. Compositions became more articulated and aggressive. The one of Cosenza Rock contest in 2003 allowed the band to participate in a compilation of local bands delivered in Calabria, and to record a new cd demo. This record contained 4 studio tracks and a live track. The work had good reviews from some music webzines. After that the band performed at Aritmia Mediterranea 2003 (Molfetta, Bari). With the help of two local directors at the end of 2004 the band made a videoclip of the song "Time's rail". In January 2005 Mark joined the band. He came from a big experience with Mas Ruido band. The live approach and the music style evolved again. Now live sets are caracterized by a great amount of stunning power and song structures are more dinamic and accurate. After a warm-up period caracterized by live shows and contest participations (Universound 2006, Arezzo Wave 2005-2006, Tim Tour 2005, DemoRaiFest 2006) the band recorded its first album "Naked to nothing" at Alpha Omega studios in Como (Italy) with Alex Azzali as producer and changed its name into Allison flower. In March, 2007, Naked to nothing was included in The Best of Demo radio show (Radio Uno Rai station) as one of the most interesting new-comer band's album.